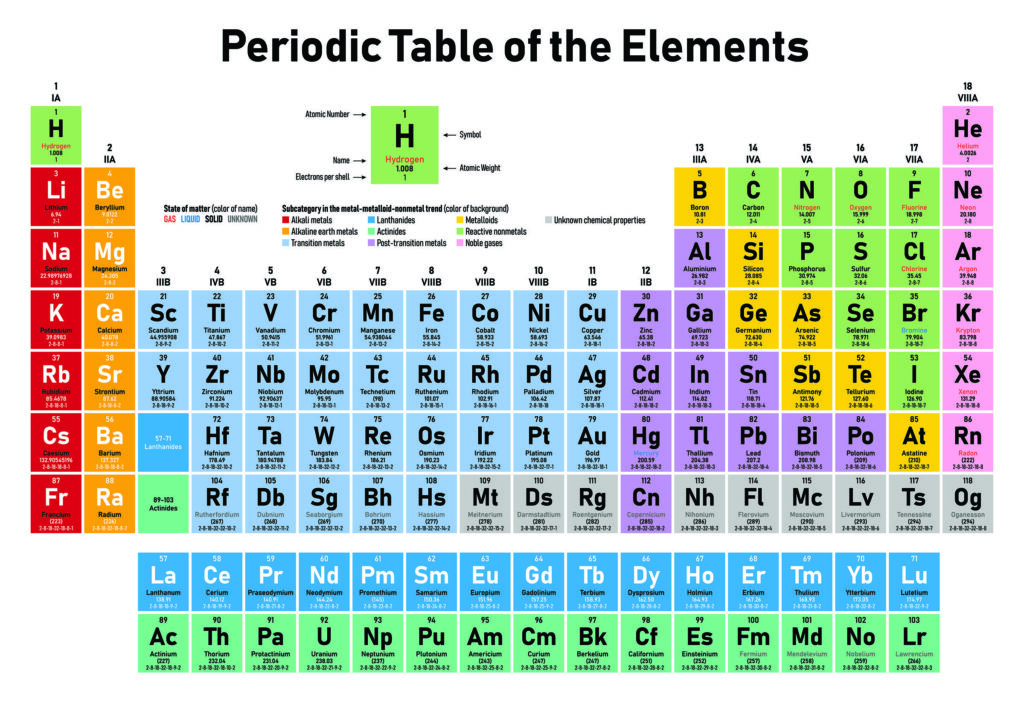 Periodic Table, also called a table of chemical elements, arranged by atomic number, electron configuration, and repeating chemical properties. The structure of the periodic table shows periodic trends. The seven rows of the table, called Periods, are usually the metals on the left and the nonmetals on the right. Columns called clusters contain elements with similar chemical behavior. The six groups accepted the assigned numbers along with the names: for example, Group 17 items were halogens; and group 18 noble gases. Four common rectangular regions or blocks associated with the filling of different atomic orbital’s are also displayed.

The elements from atomic numbers 1 to 118 have been discovered or synthesized, completing seven complete rows of the periodic table. The first 94 elements all occur naturally, although some are found only in trace amounts and some in nature only after they were first synthesized. 95 to 118 elements are synthesized only in laboratories or nuclear reactors. The synthesis of elements with high atomic numbers is ongoing: these elements begin the eighth row, and theoretical work has been done to suggest possible candidates for this extension. Many synthetic radionuclides of naturally occurring elements have also been produced in laboratories.

The periodic table organization can be used to find relationships between different structures and to predict the chemical properties and behavior of nonlinear or newly synthesized materials. The Russian chemist Dmitri Mendeleev published the first known periodic table in 1869, designed to reflect the chronology of what was then known. He also predicted some of the unknowns that were expected to fill the gaps within the table. Most of his predictions proved accurate. Mendeleev’s theory has been gradually expanded and refined by the discovery or synthesis of new materials and the development of new models for the description of chemical reactions. The present time table now provides a useful framework for analyzing chemical reactions and continues to be widely used in chemistry, nuclear physics, and other sciences.

Each chemical element has a unique atomic number (Z) that represents the number of protons in its nucleus. Most elements have a number of neutrons in different atoms, these variants are called isotopes. For example, carbon has three naturally occurring isotopes: all of its atoms have six protons and most have six neutrons, but one percent contains seven neutrons, and at the very least eight neutrons. Isotopes are never separated in the periodic table; they are always together under the same element. Elements that do not have stable isotopes have the atomic mass of their stable isotopes, where such a mass is shown, listed in parentheses.

In the standard periodic table, the elements are listed in order of increasing atomic number Z (number of protons in the nucleus of the atom). A new row (period) is initiated when the new electron shell contains the first electron. Columns are determined by the electron configuration of the atom; Elements with the same number of electrons fall into the same column. Elements having same chemical properties usually lie into the same group in the periodic table, although the F-block, and the D-block, has some respect, but the elements of the same period have similar properties. Therefore, if an element knows the properties of the elements around it, it is very easy to convey its chemical properties.

The first 94 elements occur naturally; The remaining 24, from the US to Oganesson (95–118), occur only when synthesized in laboratories. Of the 94 naturally occurring elements, 83 primitive and 11 primitive elements occur only in the chains. The heavier element than Einsteinium (element 99) has not yet been observed in its purest form of macroscopic size, nor does it contain astatin (element 85); Only fraction of the light emitted from the finite dimensions (300,000 atoms) of the Francium (element 87) is photographed.

The vertical columns in table are called groups. Groups usually have more important periodic trends than periods and blocks, described below. Modern quantum mechanical theories of molecular structure explain group trends by proposing that elements of the same group usually have the same electron configurations in their valence shell. Consequently, elements of the same group exhibit a clear trend in chemical properties by increasing atomic number. In some parts of the periodic table, D-block and F-block, horizontal similarities are more important or more pronounced than vertical similarities. 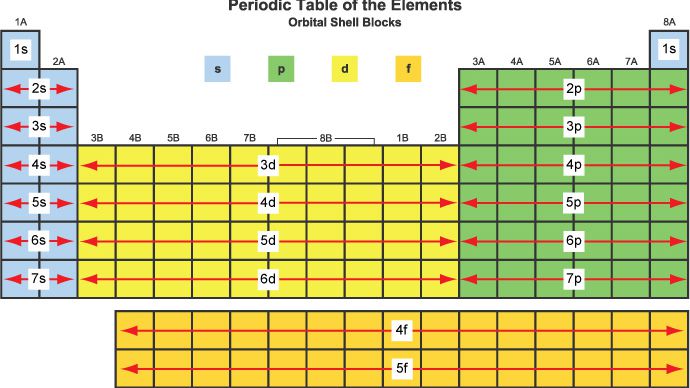 According to the International Naming Conference, the groups were numbered 1 to 18 from the left column (alkali metals) to the right column (noble gases). In the past, they were called by Roman numerals. In United state the Roman numerals follow “A” or “B” if the group is in d-block if the group is in s- or p-block. The Roman numbers used correspond to the last digit of today’s naming convention. In Europe, “group” is used to treat groups 8, 9 and 10, except group “A” is used if group A is before group 10 and “B” are used for later groups, including group 10, collectively known as VIII in both codes. In 1988, the new IUPAC naming system came into effect and the old group names were removed.

Some of these groups are given trivial (irregular) names, as can be seen in the table below, some are rarely used. Groups 3-10 have no trivial names and are referred to by their group numbers or by the name of the first member of their group (such as “scandium group” for group 3), because they exhibit low similarities and / or vertical trends.

Items in the same group show patterns in atomic radius, ionization energy and electronegativity. From top to bottom in the group, the molecular radius of the elements increases. Because of the higher filled energy levels, the valence electrons look away from the nucleus. From the top, each successive element has lower ionization energy because it is easier to remove the electron as the molecules are less strongly bound. Similarly, a group electronegativity decreases from top to bottom due to increasing distance between valence electrons and the nucleus. There are exceptions to these trends: for example, in group 11, the electronegativity increases with the group.

Group 1 is composed of hydrogen (H) and alkali metals. The elements of the group contain an s-electron in the outer electron shell. Hydrogen is not considered alkaline because it rarely exhibits comparable behavior with alkali metals. This makes the group somewhat unusual.

Group 18, noble gases, were not found during Mendeleev’s original table. Later (1902), Mendeleev accepted the evidence for their existence, and placed them in the new “Group 0”, without breaking the principle of the stable and periodic table.
Name of the group recommended by the IUPAC.

Elements of the same period show trends in nuclear radius, ionization energy, electron affinity, and electronegativity. The atomic radius usually decreases when moving from left to right over a period of time,. This occurs because each successive element has an additional proton and an electron, causing the electron to be closer to the nucleus. This decrease in the molecular radius increases the ionization energy as it moves from left to right over a period of time. The more tightly bound an element is, the more energy is required to remove the electron. The pulling of electrons through the nucleus increases the electronegativity as the ionization energy. The electron affinity also shows a slight trend over a period of time. Metals (left side of a period) usually have less electron affinity than nonmetals (right side of a period), excluding noble gases.

Specific areas of the periodic table can be represented as blocks to determine the order in which the electron shells of elements are filled. Each block is named according to the “last” electron accidental subshell. The S-block consists of the first two groups (alkali metals and alkaline earth metals) as well as hydrogen and helium. The P-Block contains the last six groups, which contain all metalloids, including groups 13 to 18 in IUPAC group numbering (3A to 8A in American group numbering) and other elements. D-Block consists of groups 3 to 12 (or 3B to 2B in American group numbering) and all transition metals. The F-block, often offset above the rest of the periodic table, does not contain group numbers and contains lanthanides and actinides.

According to physical and chemical properties, the elements can be classified into the three main categories of metals, metalloids and nonmetals. Metals are generally shiny surface, form alloys with one another, and form salt-like ionic compounds with nonmetals. Most of the nonmetals are colorless or colorless insulating gases; Nonmetals that form compounds with other nonmetals have a covalent bond. There are metalloids between metals and nonmetals, which have intermediate or mixed properties.

Metals and nonmetals can be classified into subcategories that show graduation from non-metallic to non-metallic properties, from left to right in rows. Metals can be broken down into archetypal transition metals, high reactive alkali metals, low reactive alkaline earth metals, lanthanides and actinides and physically and chemically weak post-transition metals. Nonmetals can be subdivided into polyatomic nonmetals, close to metalloids and showing some early metallic properties; particularly nonmetallic diatomic nonmetals, nonmetallic and almost completely inert, monatomic noble gases. Specific groups, such as refractory metals and noble metals, are examples of sub-metals of transition metals, also known and occasionally referred to.